What Covid-19 Taught Us About Doing Business During a Crisis

What Covid-19 Taught Us About Doing Business During a Crisis

A 2021 survey of seven cities around the world during the Covid-19 pandemic offers clues to how businesses handle crises. Analyzing responses from 78,000 people in Bogotá and Medellín, Colombia; Beirut, Lebanon; Cape Town, South Africa; Caracas, Venezuela; San Pedro Sula, Honduras; and San Salvador, El Salvador, the authors find that many of the biggest challenges that firms face under crisis are sociopolitical in nature, not financial. As such, these challenges are complex, systemic, and hard to quantify. They also scare managers operating in these contexts, especially in cities where extortion and business violence are pervasive. In such settings, firms benefit from community embeddedness and a recognition that they are both influenced by and able to shape the systems around them — positively or negatively.

Over the past two years, the Covid-19 crisis has forced a fundamental reordering of work and life around the world. But has the experience helped organizations prepare for future crises? To answer this question, we studied how relationships between businesses and society have changed during the pandemic in several global cities known for their dynamic growth but also deep fragility.

We surveyed 78,000 people via mobile phone in Bogotá and Medellín, Colombia; Beirut, Lebanon; Cape Town, South Africa; Caracas, Venezuela; San Pedro Sula, Honduras; and San Salvador, El Salvador. Of this number, 16,500 respondents were business owners and managers. Because we tailored questions to local contexts and did not ask all questions in all cases, the number of respondents for the questions varies. (More on our survey methodology by our partner RIWI is here.)

We gleaned insights from both business leaders and citizens about the broad challenges they faced, and this article presents our most important findings. They point to a way forward for any manager working in a risky sociopolitical environment.

[  1  ]
Businesses can be seen as problem-solvers and peacemakers during a crisis — or as harmful actors.

Covid-19 affected urban communities unevenly. Most cities had neighborhoods that struggled through the pandemic’s downturn, juxtaposed with pockets of affluence. In areas that deteriorated (as perceived by respondents through metrics including public safety, extortion, and corruption), citizens overwhelmingly said businesses were part of the reason they were struggling. In areas that did well, though, residents credited businesses with their shared success. This is due in part to perceptions of how companies fared relative to their communities. 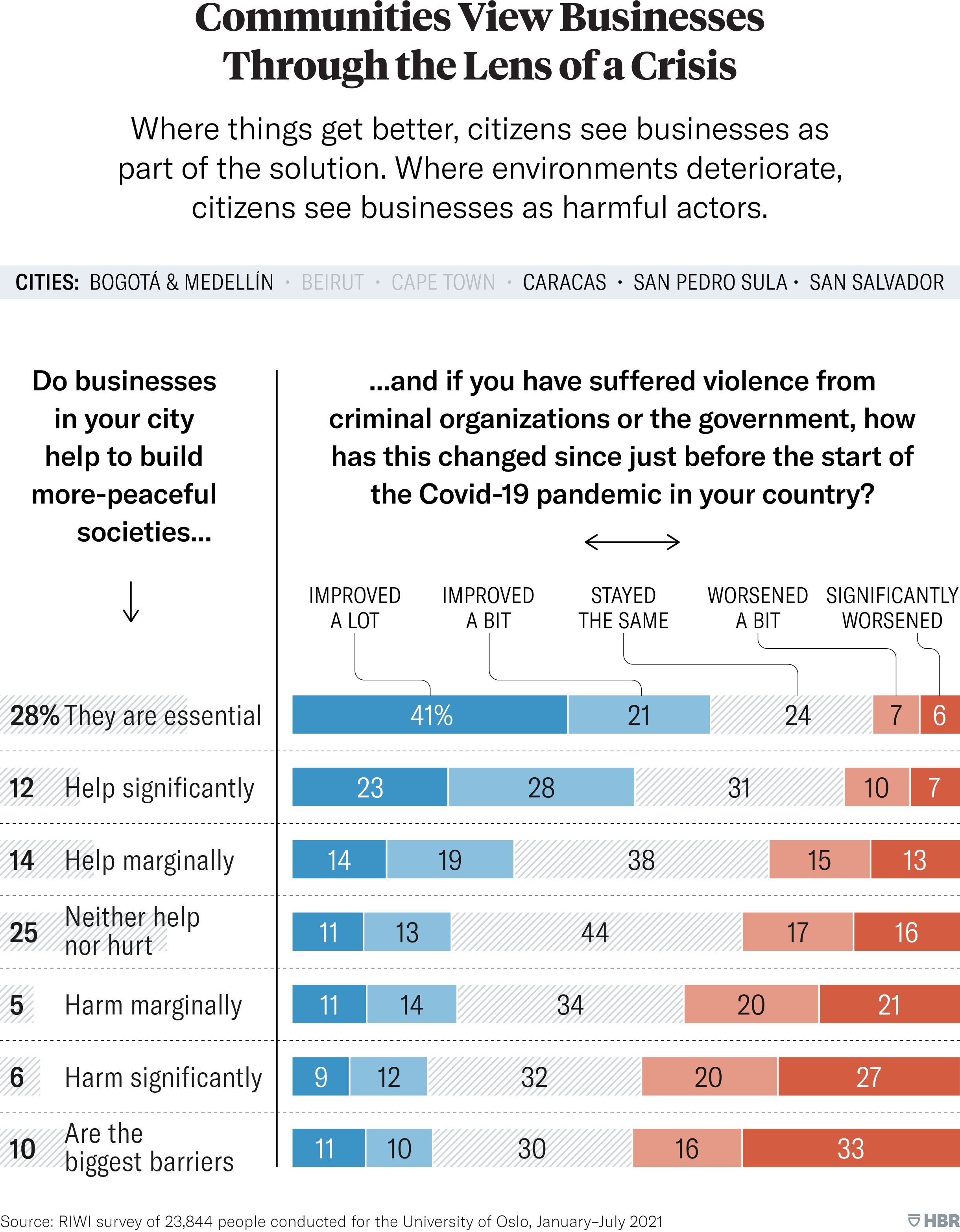 These findings highlight an important correlation: Companies that were more responsive to community well-being were also more successful in working through challenging environments. During Covid-19, these sorts of efforts included hiring disadvantaged workers, undertaking direct charity and philanthropic work, assisting the unemployed, helping to reduce local violence and conflict, and other concrete community-building measures. This kind of work pays off: Companies that did it were nine times more likely to survive than those that didn’t. 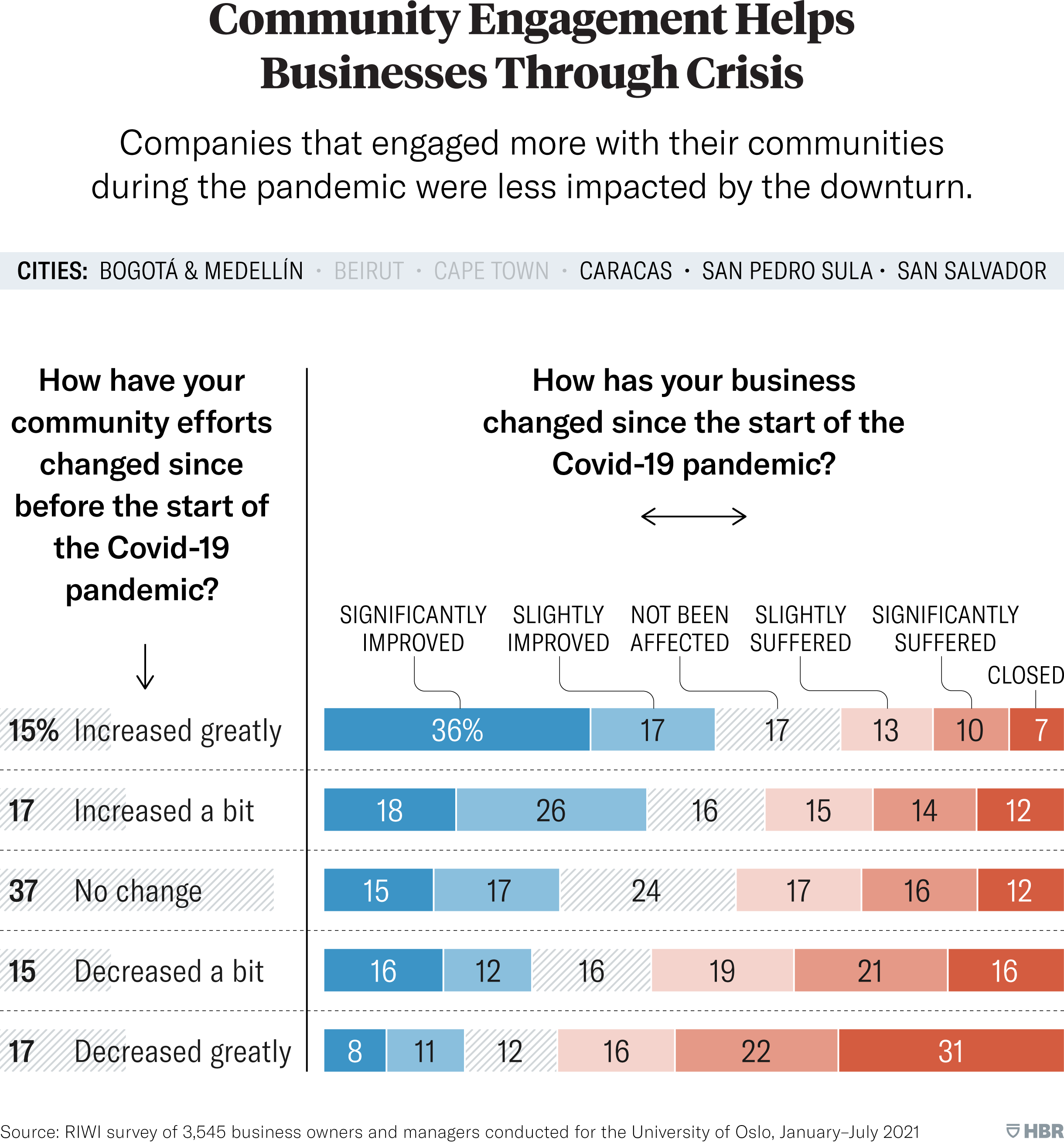 It’s encouraging that so many businesses helped their communities during the pandemic. Our survey in Cape Town, in which about 15% of respondents were business owners or managers, showed just how much people relied on businesses to support them. 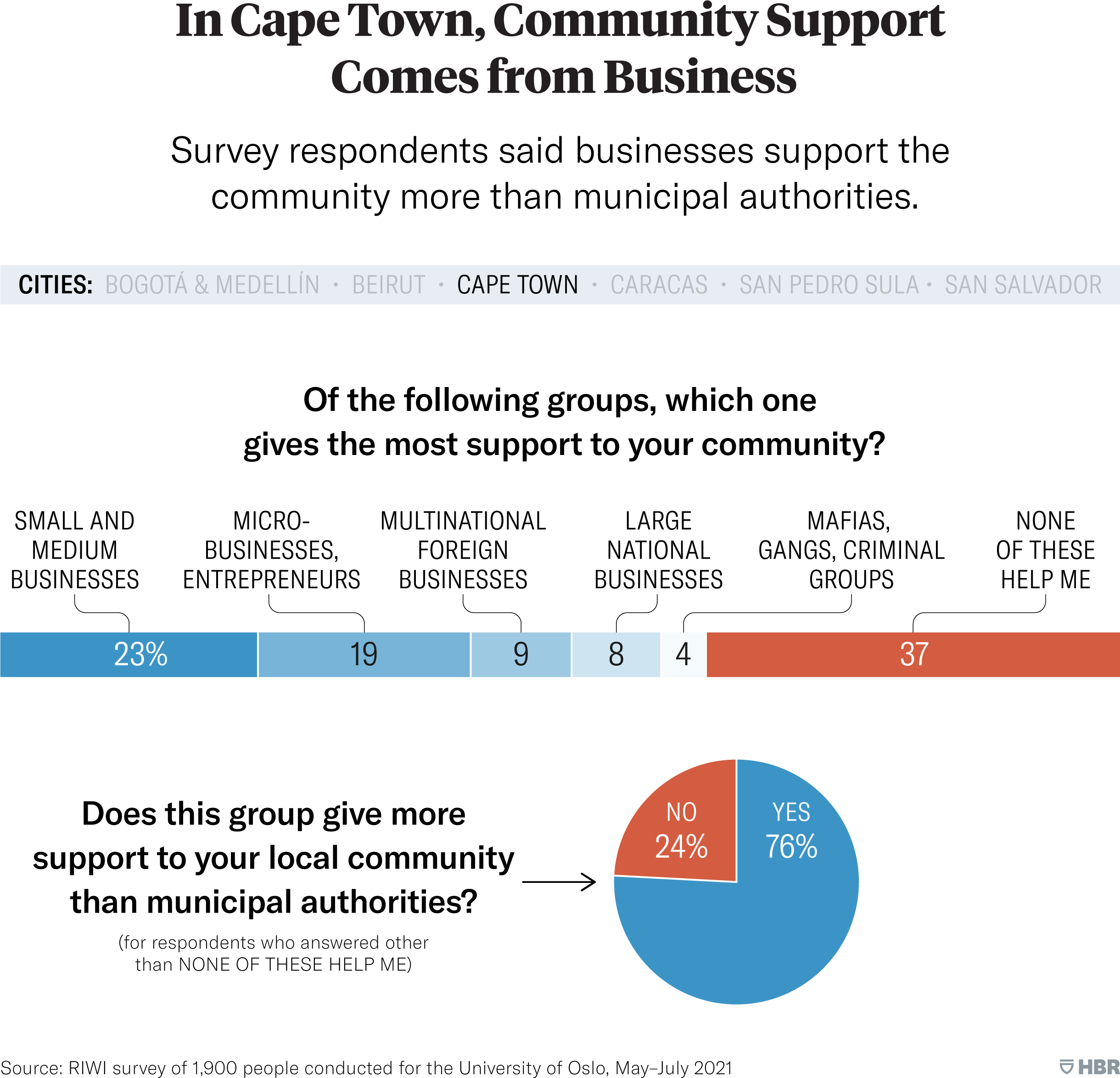 [  2  ]
The pandemic has exacerbated the threat of extortion and violence against firms.

It is hard to overstate the precarity of many business environments today. More than 55% of our respondents said their companies had recently been threatened with violence or extortion, a finding that held across firm sizes, sectors, and other differences. While the initial Covid-19 wave in early 2020 led to a downtick in crime, especially in Latin America as communities entered lockdowns, the longevity and depth of the crisis have triggered a whiplash effect. Extortion figures in some cities are now at all-time highs, for example, with a rapid growth in actors exploiting the pandemic to enhance their digital extortion capabilities and targets. 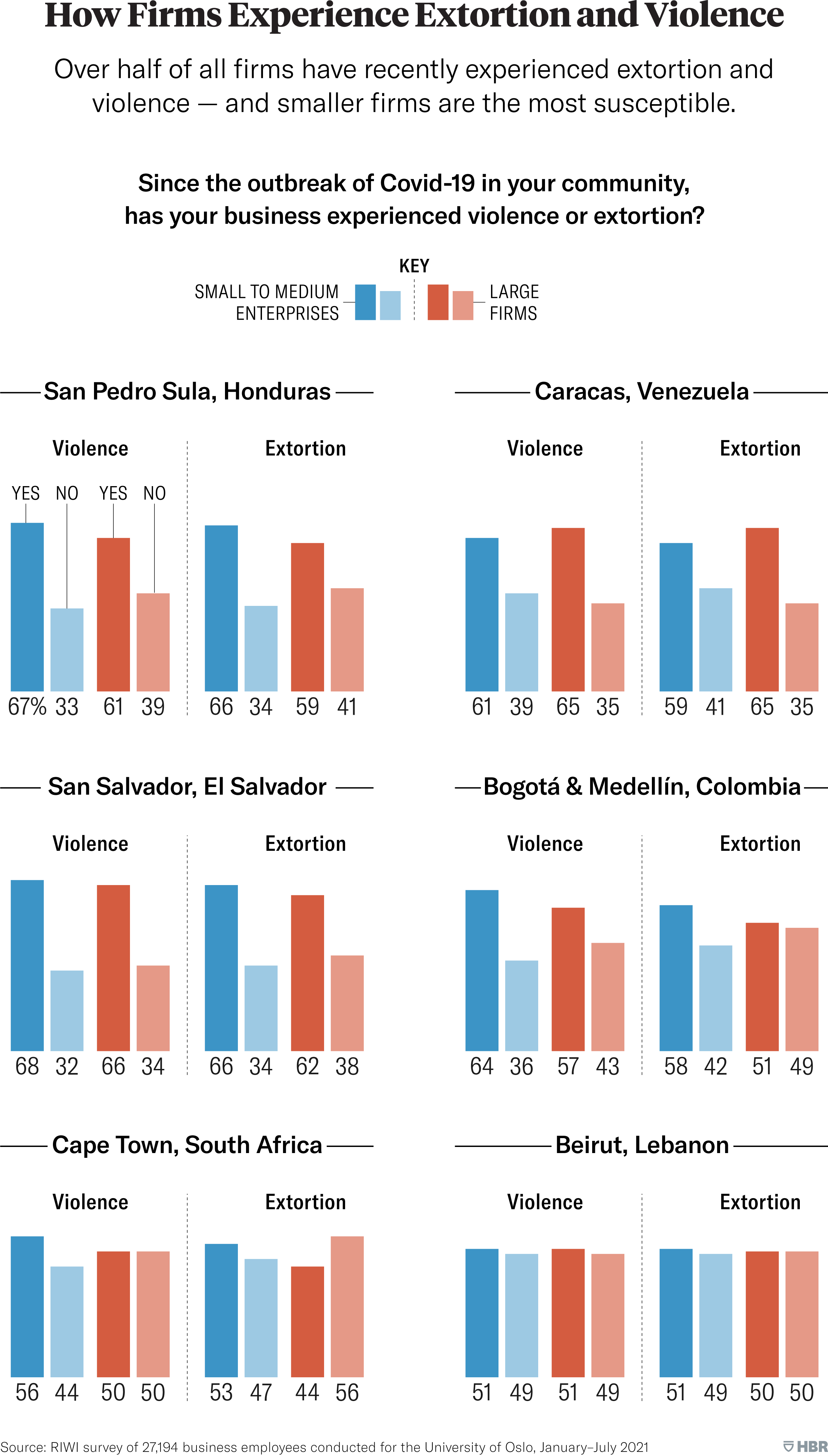 Firms operating in such violent settings are part of the conflict dynamics whether they take an active role, directly engage with the state or criminal gangs, or subvert violence. Those that speak out publicly against these crimes create new risks for themselves. For instance, 32% of owners and managers in Caracas, San Pedro Sula, and San Salvador said that when they took such actions, it harmed their businesses. These findings highlight how the symbiotic relationships between communities, businesses, the state, and criminal groups can perpetuate insecurity within firms and communities.

[  3  ]
Generational shifts seem to be upending norms of business-community engagement.

Our survey uncovered some positive — and some concerning — trends about younger generations of business owners and managers in crisis settings. On the positive side, this cohort sees corporations as more deeply social and political than their older “stick to business” counterparts do. Moreover, citizens aged 18 to 35 were twice as likely as their older peers to see foreign multinationals and large national firms as positive forces in the community. For example, in Latin America, those aged 18 to 24 were 70% more likely to engage in corporate social responsibility efforts than those aged 35 to 64. Perhaps as a result, their firms were also more than twice as likely to have experienced significant growth since March 2020 than those of their older peers.

Younger generations also saw political and/or municipal support as more important to business survival than their older counterparts did, even though it was often nonexistent. However, perhaps because of this lack of aid, this cohort is also more likely to reach out to criminal organizations. Younger managers and owners are three times more likely to receive support from mafias and other unlawful groups than their older peers are, perhaps because they are 32% more likely to be victims of crime and extortion and 25% less likely to get support from municipal authorities.

For example, in Cape Town, the Covid-19 crisis exacerbated problems of endemic crime and institutional weakness. We found that 62% of those aged 18 to 25 believe violence is at least sometimes justified, compared with 36% of those aged 46 to 55. The younger cohort is also the most likely to cope with social crisis by building relationships with violent actors and to see gangs as positive forces in their communities. Those attitudes might be driven by a lack of faith in the state: This age group is more likely than any other to say that government officials are the primary instigators of violence and extortion.

These perspectives influence citizen perceptions of business-community interactions more broadly. For example, 18-to-25-year-olds in Cape Town are the least likely to believe that small businesses in their communities make life better, and the least likely to turn to formal institutions for help.

In the short term, these beliefs may make resorting to violence more easily justifiable and socially acceptable; in the longer term, they may further alienate the age group from formal institutions and result in gangs being the primary mechanisms of local governance. The Cape Town data illustrates how a shock on top of an endemic crisis of violence — in this case, the arrival of Covid-19 — pushes the system even faster toward the breaking point. 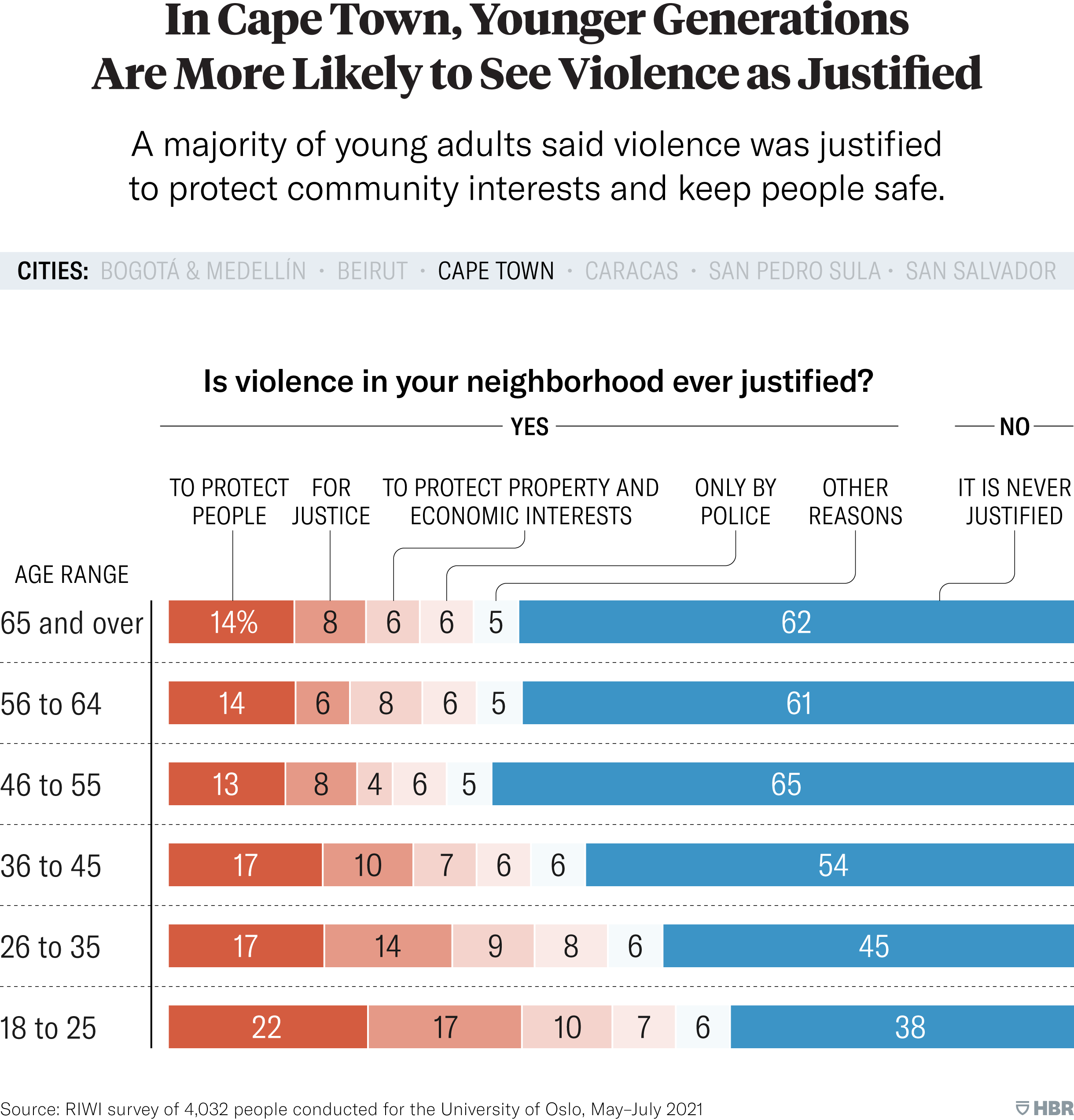 [  4  ]
Smaller firms get the least assistance from governments in crisis, but they are seen as key to community success.

Businesses of all types have faced immense pressure from the Covid-19 pandemic. This pain included higher-than-normal closure rates, difficulty keeping up with payments to suppliers and employees, and new (and changing) regulatory requirements. Governments around the world passed initiatives to help firms meet these challenges, but aid was delivered unevenly and often not to the firms that needed it most. For example, in the cities we surveyed, only 9% of businesses received significant assistance, while a full 75% received none.

Strikingly, firm size mattered significantly when it came to government aid. The smallest companies were three times less likely to get it than larger firms and less likely to get help from business associations and municipal authorities.

The amount of government aid received corresponded to how well companies were able to ride out the pandemic. For example, 70% of sole proprietorships were negatively affected by the pandemic (including loss of revenue, employment, supply chain issues, and similar) and 30% permanently closed from March 2020 to our survey period. Compare that with the nearly 60% of firms employing more than 100 people that saw stable or improving business: Only 12% of these organizations closed. 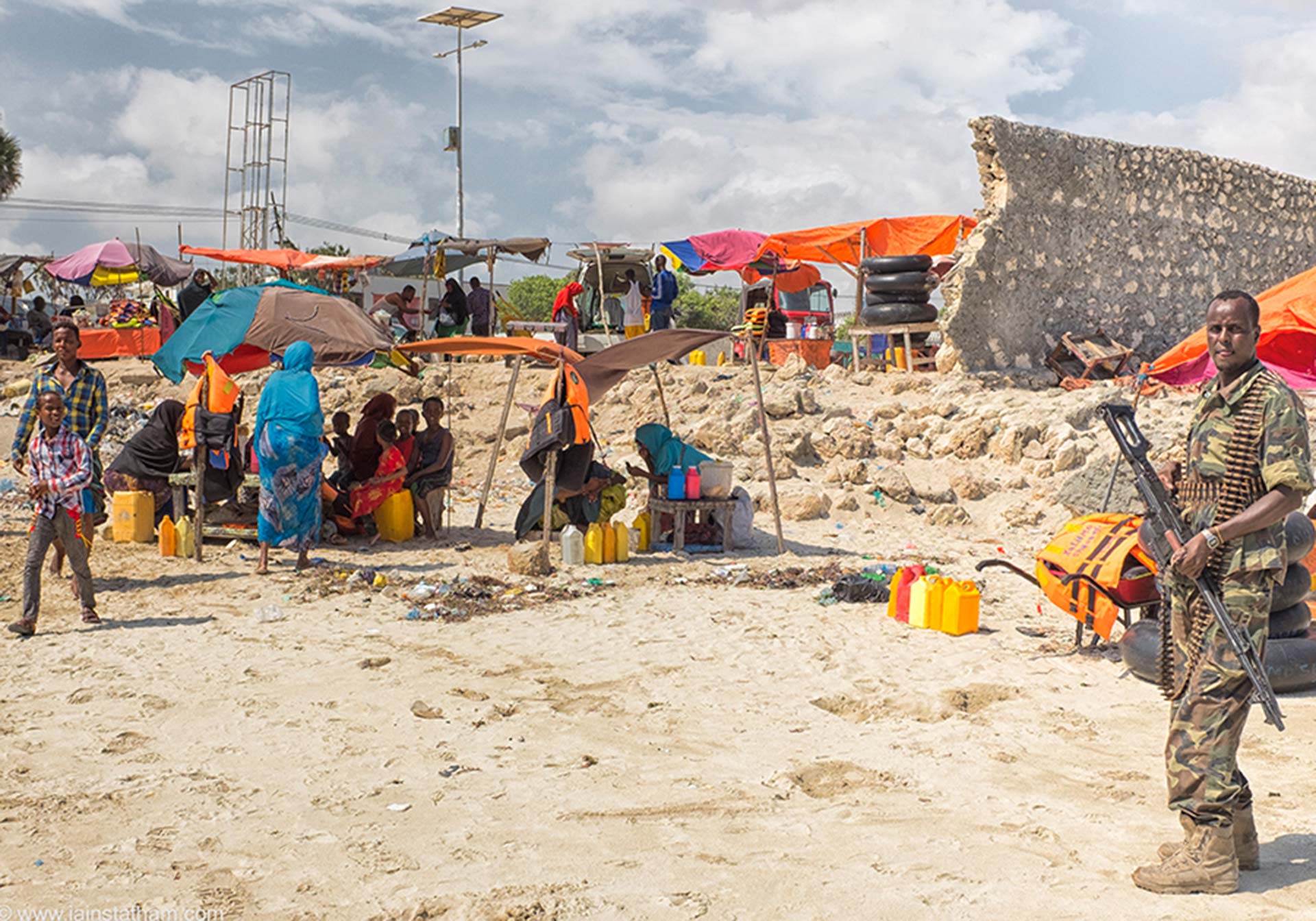 Building a Culture That Can Withstand a Crisis

How a company that works in conflict zones prepares for the unknown.

And yet small businesses are critical to community success, as evidence from Lebanon suggests. The country has recently suffered a series of consecutive, overlapping crises: a political revolution and protests in 2019, the Covid-19 pandemic, the August 2020 explosion at the Port of Beirut, and now the current financial crisis in the country, which some have called the worst in the world since the 1800s. As a result, nearly half of Beirut residents feel less safe than in 2019, while only 18% feel safer, according to our results.

And yet, despite their vulnerability and comparative lack of resources, two-thirds of respondents in Beirut said that small businesses were making concrete efforts to help their communities, while nearly half felt that large national and foreign firms were providing no support at all. This suggests that small businesses seen as strong community supporters have a comparative advantage going forward. 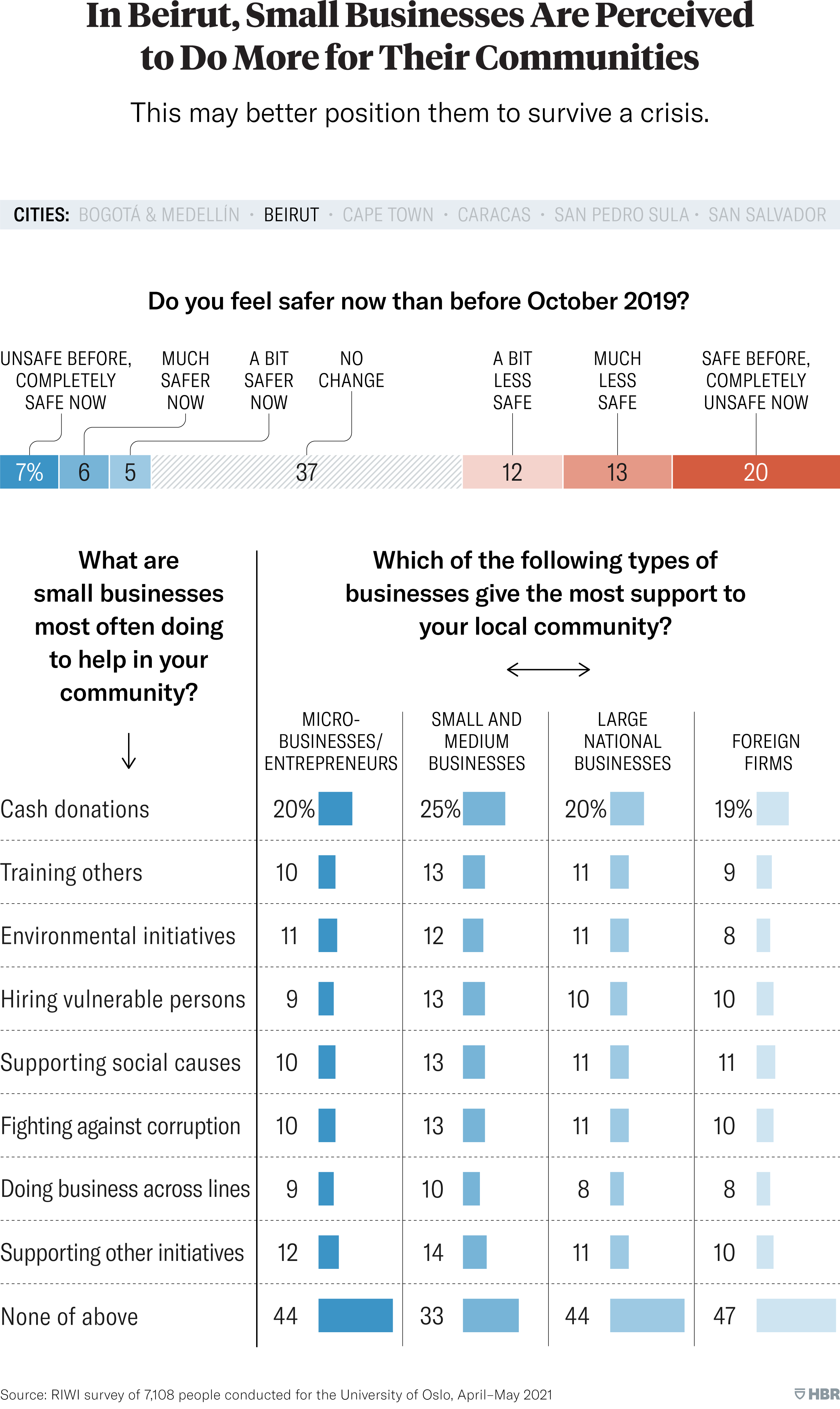 What These Results Mean for Managers

Sociopolitical challenges can be complex, systemic, and hard to quantify — and extortion and violence against businesses in particular are more pervasive than many assume. In such settings, companies may benefit from increasing their community embeddedness. Where firms do not have the luxury of a peaceful, well-governed society, this might mean dealing with illicit actors as a matter of necessity. However, such strategies can create an economy dominated by criminal organizations, further contributing to societal fragility and operational risk.

More positively, our findings provide support for managers who take a relational rather than a transactional approach to community engagement. In any situation of rapid social reordering triggered by crisis, firms that have already established and continue to build strong bonds with the local citizenry are more likely to succeed.

When managers invest in community embeddedness — hiring locally, engaging in two-way information sharing, or consulting with area leaders on business decisions — they may not see immediate operational or financial wins. But in the long term, they will build trust and mutual respect, which can lead their communities to reciprocate, supporting those companies and their ongoing success. 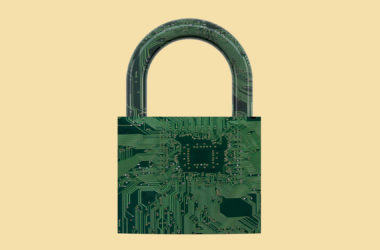